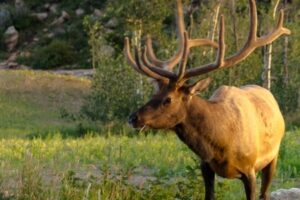 What are some mistakes people make when hunting elk?

For starters, hunters tend to look far off in the distance for elk while ignoring the area nearest them. You never know when an elk might be close by.

Loud talkers do not do well as hunters. If you’re hunting elk, you’ll want to whisper with any hunter partners. And pay attention to your gear so that it doesn’t clack and rattle as you move about. Keep in mind that elk hear well. When hunting elk, you need to think like elk do and move like them, too.

For those who’ve heard stories of ideal places where elk densities run high, like a particular forest fringe area during late seasons, there’s no guarantee the “sweet spot” will actually have elk there. Legendary places are just that… and the habits of elk do change over generations. Yes, you may find they like certain areas better than others, but don’t solely rely on “legends” for your hunting purposes.

Also, some hunters have an idea in their head that they’re only going to try and hill an outsize brute bull. That could be a mistake if the hunter passes up killing lesser elk along the journey, never to encounter “the big one” he or she’s too focused on. It’s smarter to be realistic when hunting elk.

Other Things to Remember When Elk Hunting

For some hunters, they make the mistake of heading out in vehicles, along roads, looking for elk on mountainsides… to no avail. Elk aren’t dumb. Cows know they’re not a hunter’s main target so they might be clustered together somewhat near roads, but bulls seem to know they’re being hunted and therefore stay far away from roads. Indeed, mature bulls often are far off by themselves. They know what’s going on so they’re not going to stay in areas near roads and/or where people tend to be. If you want to find bulls you’ll need to go deep in the brush and woods, far away from people and noises associated with human life like sirens and chainsaws. Yes, you might have to travel more than a dozen miles “off road” in pursuit of the bull(s) you’re after, but that’s part of the game.

Finally, a common mistake many hunters make is not putting enough time into their hunt. If you want to truly hunt elk, you’re going to have to be out on the land really early in the morning and be prepared to stay late. Hunting elk isn’t a quick two hour option, though some hunters give up and go home after such a short time. Hunting, like anything rewarding in life, takes a lot of time and patience.