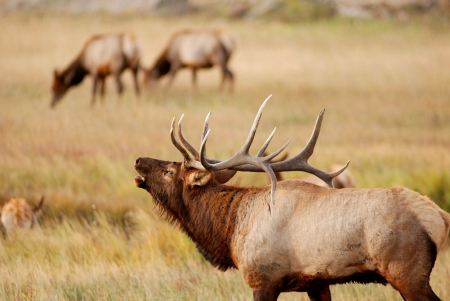 There are more elk living in Colorado at this time than in any other part of North America. There are almost 300,000 elk in the state, which has forced both state and federal wildlife officials to take drastic measures to keep the elk population in Colorado in check. Nevertheless, it wasn’t always this way. Elk have a long and storied history in Colorado that has involved a series of ebbs and flows.

When Elk First Appeared in Colorado

Elk first started to show up in Colorado anywhere from 8,000 to 10,000 years ago. At that time, experts believe that there may have been as many as 10 million elk living throughout the country. But the elk population in Colorado and in the U.S. as a whole dwindled down over the years once the country started to take shape and develop. And by the early 1900s, there were fewer than 100,000 elk in the U.S.

As of 2019, there are millions of wildlife lovers who flock to Colorado every year because of the elk population. There are also about 250,000 hunters who visit Colorado to hunt elk each year. Elk hunting has become one of the most popular outdoor activities in the state, and it generates a lot of money for Colorado year in and year out. Nearly 50,000 elk are harvested by hunters thanks to the popularity of elk hunting.

Would you like to come to Colorado to see what elk hunting in the state is all about? Samuelson Outfitters would be happy to host you on your next elk hunting adventure. Call us at 970-726-8221 today to reserve a deer and elk hunting trip in Colorado with us.