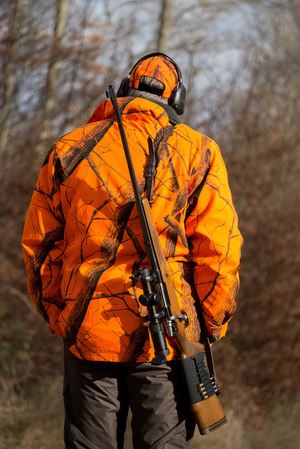 In a world where people are becoming increasingly vain and the trend is to take “selfies” using smartphones, one of the nice things about hunting as a hobby or sport is that it encourages a sense of camaraderie. Hunters tend to look out for one another, and that’s a very good thing. Not only is it nice to know you’ve got a buddy who cares that you’re okay when you’re out on the land, exposed to the elements, but it’s also nice to know he or she is going to take precautions to make sure you come back alive from your excursion. Gun safety is of the utmost importance these days.

Anytime you get guns and ammo involved with people, though, there’s always a chance that something goes wrong and someone gets shot. Obviously, when hunting animals like elk, no hunter wants to shoot a fellow hunter, right? They also don’t want to accidentally shoot a non-hunter.

Right now there are literally hundreds of thousands of hunters with rifles hunting in Colorado and nearby states. In general, the chances of a person being shot by another person while hunting are slim to none, but it does happen.

But here’s the good news: there are less hunting fatalities and accidents today than in the past. If you rewind all the way back to the 1960s, hunters in Colorado averaged nine fatal and 24 non-fatal accidents each year, according to a story posted on Coloradoan.com. However, in 1970 the state legislature passed the hunter education course completion requirement, and that had a major impact on safety during hunting seasons since. According to Colorado Parks and Wildlife, today the state averages about one fatality a year and five non-fatal accidents a year.

Basically, hunters in Colorado take classes which teach them how to use their firearms safely and responsibly wherever they may be. Colorado also requires hunters to wear fluorescent orange during rifle seasons, which helps keep them safe.

When you hunt, you want to shoot elk– not people. Colorado takes hunter safety seriously, and it’s good to know that shooting accidents and fatalities are rare.