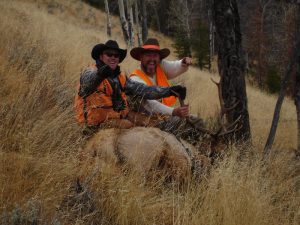 What are some factors to consider when doing late season elk hunts in Colorado?

Typically, late season hunts are done at lower altitudes. If there’s snow on the ground, it helps with tracking animals. And, because of the season, you just might see migrating animals pass before you as they’re “on the move,” rather than staying in one place all the time.

Veer to the Hillsides

As for elk, they tend to herd up on south facing hillsides during November and December because that’s where the forage is. Big bulls might head off solo or hang around a couple others while trying to build their fat stores. It’s the time of the year for elk to spend the majority of their time eating in anticipation of a cold winter, so hunters are likely to find elk in open areas just out of the woods where they can find food at this time of year.

Know What the Elk Are Looking For

It’s not unusual for herds to move 10 to 40 miles per day, so hunters need to be on the lookout for areas that offer the elk exactly what they want: water, grazing opportunities and cover. These areas are usually away from major highways– elk don’t want to be around cars and trucks and people if they can avoid them. Areas designated “state wildlife areas” are good places to find elk late in the season.

The weather plays a major role in late season elk hunts. Keep in mind that elk are always warm, no matter how cold you– the hunter– may feel. So you have to dress appropriately for the air temperatures each day, which can hover in the 60s on warm days but get down close to zero on cloudless nights. Therefore, it’s a good idea to dress in layers. Here’s something else to consider– like people, elk will “hunker down” in one spot when the weather is extremely cold. They’re trying to conserve energy and prevent heat loss. This could work to your advantage in finding them on extremely cold days.

Hunters need to be prepared if it snows during their hunting expedition. Bring enough food “just in case.” Bring chains for the tires on your vehicles. And don’t forget extra gas, in case you have to go further than planned to find elk. As for hunting in the snow, check for fresh scat and look for tracks. Fresh tracks can lead you right to herds. Generally, elk don’t hang out in areas where snow is over 16” on the ground, so you’ll want to look for areas where the snow isn’t so deep.